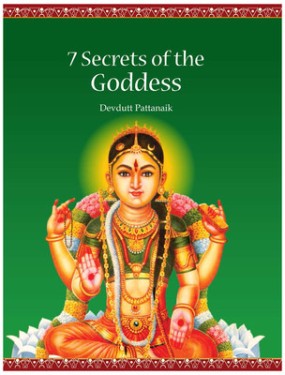 Lakshmi massages Vishnus feet. Is this male domination? Kali stands on Shivas chest. Is this female domination? Shiva is half a woman. Is this gender quality? Why then is Shakti never half a man? Taken literally, stories, symbols and rituals of Hindu mythology have much to say about gender relationships. Taken symbolically, they reveal many more things about humanity and nature. This is the fourth title in the bestselling 7 Secrets series.

The six goddesses in the Indian mythology Kali, Gauri, Durga, Lakshmi, Saraswati, and Vitthai are discussed in great detail in the book.  Gaia, the Goddess from Greek mythology blends in beautifully in this narrative of the Indian goddesses. The secrets revealed are beautifully woven into the intricate narrative that is Devdutt’s forte’. The book focuses on the  equality of male and female forces in the ancient times and how it tilted towards men as society evolved over time and patriarchy emerged.
In typical Devdutt Pattanaik style the illustrations hold the story together. They take the reading experience to a whole different level.

The author is a Doctor. He worked in the Pharma Industry for 15 years. After that he became an author. With more than 50 books and 500 articles under his belt, Mr. Pattanaik writes about Mythology in the light of today’s times. All his books are illustrated by him too. I am a big fan of the ace mythologist. He effortlessly manages to throw a new light on stories that have been told and retold time and again.

I cannot wait for the next book in the series!

“How do I know I can trust you?” She asked softly, from behind the her guard. “The best way to find out if you can trust somebody is to trust them” He replied, patiently waiting for her to let him in.
The dark room in her head was about to have its first visitor.