Lakshmi massages Vishnus feet. Is this male domination? Kali stands on Shivas chest. Is this female domination? Shiva is half a woman. Is this gender quality? Why then is Shakti never half a man? Taken literally, stories, symbols and rituals of Hindu mythology have much to say about gender relationships. Taken symbolically, they reveal many more things about humanity and nature. This is the fourth title in the bestselling 7 Secrets series.

The six goddesses in the Indian mythology Kali, Gauri, Durga, Lakshmi, Saraswati, and Vitthai are discussed in great detail in the book.  Gaia, the Goddess from Greek mythology blends in beautifully in this narrative of the Indian goddesses. The secrets revealed are beautifully woven into the intricate narrative that is Devdutt’s forte’. The book focuses on the  equality of male and female forces in the ancient times and how it tilted towards men as society evolved over time and patriarchy emerged.
In typical Devdutt Pattanaik style the illustrations hold the story together. They take the reading experience to a whole different level.

The author is a Doctor. He worked in the Pharma Industry for 15 years. After that he became an author. With more than 50 books and 500 articles under his belt, Mr. Pattanaik writes about Mythology in the light of today’s times. All his books are illustrated by him too. I am a big fan of the ace mythologist. He effortlessly manages to throw a new light on stories that have been told and retold time and again.

I cannot wait for the next book in the series!

Shikhandi: And Other Tales They Don’t Tell You

, is about the presence of homosexuals,  lesbians, queers, transsexuals, eunuchs and middle genders in the Hindu mythology. These are the stories that are untold, even when homosexuality was appreciated and accepted in those times. Queerness isn’t modern, Western or sexual, says mythologist Devdutt Pattanaik. Take a close look at the vast written and oral traditions in Hinduism, some over two thousand years old, and you will find many overlooked tales, such as those of Shikhandi, who became a man to satisfy her wife, Mahadeva, who became a woman to deliver his devotees child, Chudala, who became a man to enlighten her husband, Samavan, who became the wife of his male friend, and many more. The harmony of queerness in the Hindu culture is the highlight of each of the thirty stories. “Patriarchy asserts men are superior to women. Feminism clarifies women and men are equal. Queerness questions what constitutes male and female.”

In the first half of the book, Devdutt establish the context of Queerness from the global mythological sphere bringing stories from Vikings, Egyptian Gods, Bibliographic readings and Chinese legends. In the second part, he brings stories that challenges our preset perception on sexuality. Every incident the book shares as indicative of the presence of a middle gender or a non-heterosexual conduct comes from various ancient sources such as Ramayana, Mahabharata, Puranas, present folklores, texts of South Indian authors & sages, Sangam Literature, Jain Texts, Buddhist Texts etc.

The sheer amount of research done by the author makes the book a masterpiece. Devdutt Patnaik is a Doctor. He worked in the Pharma Industry for 15 years. After that he became an author. With more than 50 books and 500 articles under his belt, Mr. Pattanaik writes about Mythology in the light of today’s times. All his books are illustrated by him too.

I am a big fan of the ace mythologist. He effortlessly manages to throw a new light on stories that have been told and retold time and again. Shikhandi: And Other Tales They Don’t Tell You

“Time for empathy, and expansion of the mind. Appreciate the stories of sensuous men and women, celibate men and women. More importantly, appreciate the different context in which celibacy was celebrated and the different context in which the dance of the enchantress was celebrated. Even more importantly, appreciate the vast volume and diversity of India, where things have never been static, where things are never static, where the past and the present coexist simultaneously, the liberal coexists with the conservative, the wise next to the most unfair.” says Devdutt.

Ramayana is one of the two mythological Indian epics that have been told and retold over the years. It is the story of Rama, the son of King Dasharatha. He was the heir to his kingdom, an empire. Yet, due to the malice prevalent in the palace, the Prince was exiled for fourteen years. The Ramayana is all about obeying the rules and laws of Dharma, even at the cost of personal loss and unhappiness. She plays a prominent role in the epic, but is a very quiet and restrained character. Her abandons her in the end because of the persistent gossip among his subjects about Sita’s fidelity. Sita remains quiet, does not lose her composure, and does not vocally demand retribution. Sita’s silence is not the silence of the weak. It is the silence of the ascetic, who knows the truth, and so is patient. She knows her husband loves her, and she is indispensable to him. Moreover, she knows she is the Goddess who makes him the God, the woman who makes him the whole man.

The book explores the enigma of Sita and explains her real strength of character. “The journey to discover Sita makes you realize that the Ramayana is not a book, as most people assume, but a vast tradition manifesting itself in written, oral and visual traditions. And for some reason, children of India have been kept away from it. Yes, we are told of the Valmiki Ramayana, but we are not told that there are several versions of this original story itself a northern version, a southern version, an eastern version, which have barely a third of the verses common between them. Then there are Sanskrit plays written by dramatists like Bhasa and Bhavabhuti where Ram is a great hero, not necessarily God. Then we find Ramayanas of the Jains, the Buddhists as well as from South East Asia, which retell the same story but with a very different emotion. From the tenth century onwards we find the Ramayana in each and every Indian language, written by several authors, in different scripts, with different styles, all deeply immersed in bhakti. It is through these regional narratives, not the Sanskrit ones really, that ideas related to love, valour, fidelity and wisdom spread to every corner of India.” says Devdutt Pattanaik  in an exclusive article for Flipkart

Devdutt Pattanaik is a doctor who became a writer. Other books by this author include Business Sutra: A Very Indian Approach to Management, 7 Secrets of Vishnu, Jaya: An Illustrated Retelling of the Mahabharata, The Book of Ram, and Hanuman’s Ramayan.

Sita: An Illustrated Retelling of the Ramayana is a brilliant read. The illustrations add character to it. It makes you rethink the pre-set social norms of right and wrong. Devdutt is a master story teller. With this book he gives detailed insights about stories that have been told for ages. Yet again he effortlessly manages to makes you fall in love with mythology. 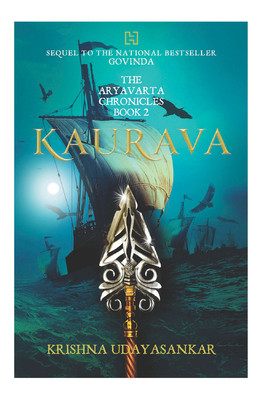 Kaurava is the second book in the mytho-historical trilogy, The Aryavarta Chronicles. It begins with Emperor Yudhisthir and Empress Draupadi, ruling over the unified kingdom of Aryavarta. The kingdom was put together for them by Govinda, with blessings from the Firewrights.

The Firewrights rise up from ashes of history, divided in their allegiance and purpose, and ready to wreak havoc on the kingdom. As sinister plots and treacherous allegiances form, the once noble land transforms into a nightmare. The Emperor gambles away the empire, while the empress is sent into exile as various factions within the realm congregate to conquer and destroy each other. Govinda knows that the only way to protect the Empress and the land is by playing a life-threatening game.

The author keeps the core of the classic saga in close contact all through the story, not altering the essence at any time. It’s the descriptions of characters and the relationships between them, which she so beautifully portrays, that keeps you hooked.
The ruthlessness of Yudhishtir, the stubbornness and strength of Panchali, the few good traces of Duryudhan, along with the twists added by Asvattama, Shikandi and Dhrstyadymn make it a brilliant read. The Draupadi-Krishna relationship over the years has been analysed as platonic, brother-sister love. In the book Panchali and Govinda have an unrequited love which ends up being the first innocent victim in the race power. That is my favorite twist.

Krishna Udayasankar is an Indian best selling author from Bangalore, India. She has also authored Objects Of Affection and The Aryavarta Chronicles (Book – 1): Govinda.

I happened to read both the books in quick succession, and now I can barely wait for the third one. In all the reconstructions and de constructions of the Mahabharata, Krishna Udayasankar’s The Aryavarta Chronicles are my favourites. 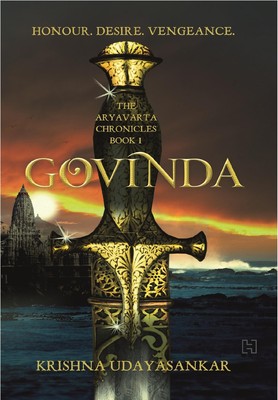 Govinda is the first book of the Aryavarta Chronicles. It is an ancient Indian mythology series. It is de constructed re-telling of The Mahabharata.
Aryavarta – the ancient realm of the noble. For generations, the Firstborn dynasty of scholar-sages, descendants of Vasishta Varuni and protectors of the Divine Order on earth, have dominated. For just as long, the Angirasa family of Firewrights, weapon-makers to the kings and master inventors, have defied them. In the aftermath of the centuries-long conflict Aryavarta gets divided into several kingdoms.
When the last Secret Keeper of the Firewrights is dead, killed by a violent hand, and the battle for supreme power in the empire is inevitable. As mighty powers march towards a bloody conflict, Govinda Shauri, cowherd prince and  Commander of the armies of Dwaraka, must use all his abilities including that of deception and treachery to protect his people.

This book is woven around the Mahabharata saga but manages to take it surpass the divinity of saga and makes a simpler socio-political story. The main characters stay the same, only here Krishna is more predominant in Govinda. The author makes the charachter of Govinda more real and thus more believable. Taking magic out and portraying him as a man, not god yet keep the enigma intact makes you understand Krishna a little more.
Even though the core story cannot be played around with much, the author adds flavour by her explanations and reasoning behind plots and situations.

The author Krishna Udayasankar is a graduate of the NLSIU, Bangalore and holds a PhD in Strategic Management from the Nanyang Business School, Singapore, where she is presently working as a lecturer. Her other works include Objects of Affection, a full-length collection of poetry and has been the editor of Body Boundaries: The Etiquette Anthology of Women’s Writing.

Humanising a saga as epic as the Mahabharata could have worked in many ways. Looking at Gods devoid of magic, walking the earth as mere mortals isn’t how some people would like their stories to be. But it works perfectly for me. Its makes its easier to explore character relationships in a different light. The research is thorough and extensive, the twist add the much needed flavour, making it a fantastic read.